Ah, the pancreas… an often overlooked and misunderstood part of the digestive system that only gets noticed by veterinarians and caregivers when it’s not working well.  But the pancreas shouldn’t just get attention when it is inflamed and painful (from Pancreatitis), or not producing enough insulin (from Diabetes Mellitus), it deserves recognition for doing its job well and not causing problems on a day-to-day basis. Today’s post is to familiarize you with the pancreas and (hopefully) give you a few tips to help you keep it happy for years to come.

Anatomy of the Pancreas

This part gets a bit technical, so bear with me. The pancreas is a glandular organ that sits behind the stomach and extends across the length of the stomach to the upper small intestinal (the duodenum). It connects to the duodenum via the pancreatic duct, which serves at the pathway for release of digestive enzymes and other essential compounds into the intestinal tract. This part of the pancreas’ job is called its exocrine function. This is in addition to the pancreas’ other, probably more familiar role, the production and release of insulin into the blood stream (i.e., its endocrine function). The endocrine pancreas will be covered in my next post on Diabetes Mellitus; I’m not completely ignoring that topic, just pushing off for now.

Pancreatic enzyme release is triggered by the hormone cholecystokinin (CCK) that is secreted from the intestinal cells in response to the intake of certain food components, specifically protein and fat. Both protein and fat will stimulate CCK release, but fat has a much more pronounced effect even at lower intakes. Irrespective of trigger, the secretion of CCK causes the pancreas to contract and squeeze pancreatic enzymes down the pancreatic duct and into the duodenum to begin the breakdown of dietary macronutrients (macronutrients = dietary protein, fat and carbohydrate). There are a few other functions of CCK, such as stimulating contraction of the gall bladder and creating a feedback on the brain to slow food intake, but it’s CCK’s effect on the pancreas that I am focusing on for management (and minimization) of pancreatitis. 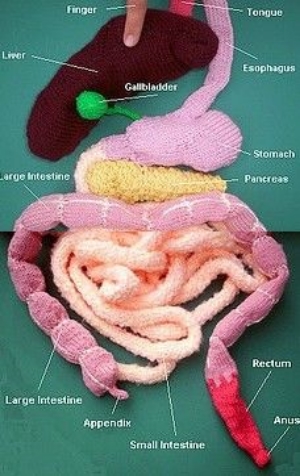 Your key digestive organs, without the actual blood and guts

The primary exocrine enzymes produced by the pancreas are trypsin and chymotrypsin (both used for protein digestion), lipase (required for fat digestion), and amylase (essential for starch digestion). These enzymes are produced in their inactive forms, which must be activated by other enzymes in the presence of bicarbonate (also made in the pancreas). For example, trypsin is actually made and stored in the pancreas as trypsinogen. Trypsinogen is packaged into zymogen granules within the pancreas and kept separate from bicarbonate. This isolation of enzymes and activators protects both the integrity of the digestive process and the pancreas itself.  If trypsin becomes activated too early not only will it not get into the duodenum where it is needed for food digestion, but it will start to digest the proteins in the pancreas instead. And this is painful. Very, very painful. 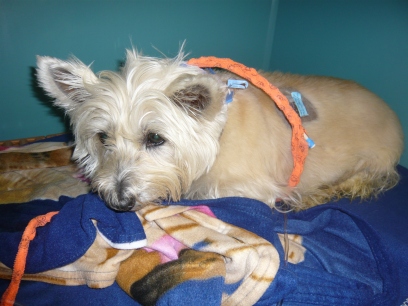 One of my former patients on IV nutritional support, fluid support and pain meds because of severe pancreatitis.

What Causes Inflammation of the Pancreas?

The clinical name for inflammation in the pancreas is pancreatitis (pancreas- = pancreas + -itis = inflammation). Pancreatitis can either be acute (vomiting and pain within hours) or chronic (low smoldering illness with vague signs that can be confused with other medical conditions).

In dogs, one of the most common dietary causes of acute pancreatitis is eating a non-food item (like 2 lb of bird seed) or eating fatty table scraps (either intentionally fed or found by rooting through the garbage). The exact mechanism of pancreatitis isn’t known but it is believed that the higher than normal fat intake causes the rapid increase in circulating blood fats and then “activation” of pancreatic enzymes within the pancreas. Other risk factors for acute pancreatitis include being a miniature Schnauzer or Yorkshire terrier (sorry pups), or any other dog breed that has a genetic predispositions to hypertriglyceridemia (the term for high circulating levels of triglyceride in the blood); being on medication such as potassium bromide and phenobarbital (two common anti-seizure medication); and being more than 20% over your ideal weight (yep, being a fat dog isn’t a cosmetic issue). Chronic pancreatitis in dogs is a bit more challenging to identify as the clinical signs can be vague and are often confused with other chronic medical conditions, because of this chronic pancreatitis is thought to be an under-diagnosed and under-reported condition. One study out of the UK conducted post-mortem evaluations of 200 dogs that had died from a variety of different causes (none of which were reported to be either acute or chronic pancreatitis in the medical records by the way) and found evidence of chronic pancreatitis in one-third of them.

Cats on the other hand like to be different. Genetics, medications, obesity, and high fat meals are not often associated with pancreatitis in cats. Instead stressful events, like introduction of a new animal into the household or having work done at your home, seem to be the more common histories among cats that present to their veterinarian with signs of acute pancreatitis. Many of these cats may also be diagnosed with what veterinarians like to call triaditis, (triad- = three + -itis = inflammation), meaning they are found to have evidence of inflammation in the pancreas (pancreatitis), in the liver (hepatitis), and in the intestinal tract (enteritis) all at the same time. Chronic pancreatitis can also be seen along with diabetes mellitus in cats, though just like with triaditis it often becomes a chicken-or-the-egg game to figure out which came first.

Animals, both dogs and cats, with mild cases of pancreatitis may vomit, refuse food, or seem quieter than usual at home. Dogs and cats with chronic, low-grade pancreatitis may have vague signs such as an intermittently poor appetite and weight loss. Severe pancreatitis can cause not only vomiting, food refusal, and lethargy, but diarrhea, fever, and abdominal pain. Severe pancreatitis, if left untreated, can also result in shock, circulatory collapse, and death. So pancreatitis is basically badness, followed by more and more severe badness if not caught and treated. 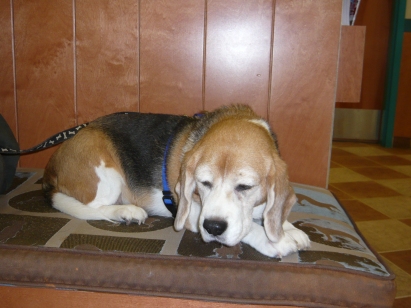 What Can We Do About It?

Supportive treatment for dogs and cats with pancreatitis is very similar: IV fluids to keep them hydrated, anti-nausea meds to stop them from vomiting, and pain control (whether they are acting overtly painful or not) will be on the list. Dietary therapy on the other hand is less consistent so here is where I’d like to provide some general guidelines to caregivers, vet techs, and veterinarians when treating dogs and cats with known or suspected pancreatitis.

The two most important features of a diet for an animal with pancreatitis are (in order of important): 1) feeding a diet that is LOWER in fat than what was being fed before and 2) feeding a diet that is MORE digestible than what was fed before. If you don’t know what is causing the GI signs you’re seeing and you have pancreatitis as one of the possible causes on the list, err on the side of caution and just feed a lower fat, more digestible diet. Seems straight forward but I see a lot of confusion in practice about how to translate this to an actual diet so I give you…

The optimal long-term diet choice for a dog or cat with pancreatitis will depend on the inciting cause (genetics, medication, hypertriglyceridemia, or high fat intake) and additional medical issues (diabetes mellitus, IBD, etc). Irrespective of underlying cause, dogs with a history of pancreatitis should never be fed diets or treats with more than 45% of the calories coming from fat due to the risk of recurrent pancreatitis.